After two Pro riders suffered serious injuries from disc brakes in the recent Paris-Roubaix, mainly Francisco Ventoso who has had a very large and gruesome chunk of flesh from his shin.

The Association of Professional Cyclists (CPA) also urged the UCI to bring disc brake use to a halt.

“We have asked to suspend the tests on the disc brakes to the UCI,” CPA press officer Laura Mora said. “They will probably suspend it. We have just had the support of the equipment commission for that.

“We have been talking about the risks of the use of the disc brakes since months and we have sent letters in the past to the UCI and the organizers to avoid such risks. Now they are going to finally listen to our voice. We don’t want to stop the progress but we want to find common solutions for the introduction of new technologies without risks for the riders and definitely with their involvment.”

Tiedemann Hansen confirmed the suspension of the disc brakes, but said that the initiative came from the UCI itself after Ventoso’s injury.

After rumours began emerging that Ventoso’s injury was due to a disc brake, the Spaniard issued a scathing open letter on Wednesday, saying the gear acted like “giant knives” after he ran into the back of another riders bike during a pile-up.

His letter garnered support on social media from his fellow professional racers, with IAM Cycling’s Larry Warbasse saying on Twitter, “We don’t need more risks than we already have in professional cycling”, and Ryder Hesjedal stating, “I have felt this way since the very beginning! Should have never happened!” about the introduction of disc brakes into the road peloton. 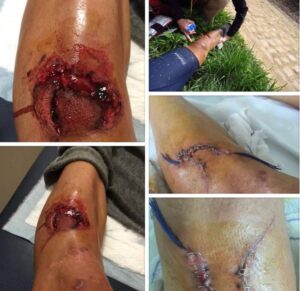 In order to provide you a personalized shopping experience, our site uses cookies. By continuing to use this site, you are agreeing to our cookie policy.

Get notified about exclusive offers every week!